After fleeing his home country of Venezuela due to political extremism, Antonio Daza made a lifelong commitment to protect justice, democracy, equity, and equality. After witnessing the violent insurrection and his own Congressman’s vote to overturn the results of the election, Antonio knew he couldn’t sit on the sidelines. Antonio is running because he knows that democracy can’t be taken for granted, and that we can be doing more than just protecting it. As an immigrant, a refugee, and a gay man in the South, Antonio is no stranger to the ways our systems are failing people. In Congress, he’ll be another bold voice with progressive ambition, fighting to defend our democracy, expand access to healthcare, combat climate change, protect workers, and champion the working class.

Antonio Daza’s unstoppable drive is what the people of Georgia’s 11th District deserve, and we’re proud to endorse him.

Indivisible Georgia 11 nominated Antonio Daza for a national endorsement. If you would like to join the group or get involved, you can find them at their website. 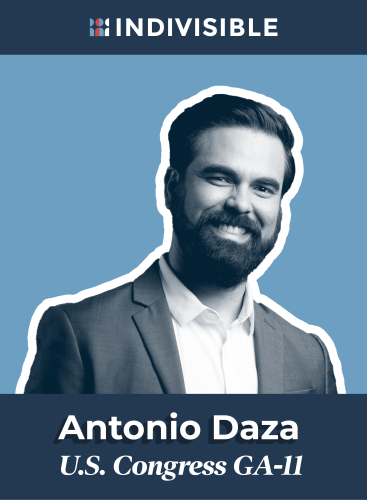