For eight years, Becca Balint has fought for the people of Vermont in the State Senate, but her work to support and foster the Green Mountain State began much earlier in her role as a public school teacher. Since 1994, Becca’s love for teaching and deep dedication to the young people of Vermont has defined her career, and has guided her in her work to deliver historic wins for all Vermonters. From a minimum wage increase, to paid family leave, to an historic climate bill, Becca has fought to build a strong progressive vision for Vermont and is ready to take that fight to the U.S. House of Representatives.

Becca knows the dire stakes of the threats we face today. As a gay woman and the granddaughter of Holocaust victims, she has a deep personal understanding of the dangers posed by an extremist, anti-democratic right wing. In Congress, she will lead with values and courage while rejecting corporate influence and political corruption.

Indivisible Calais nominated Becca Balint for a national endorsement. If you would like to join the group or get involved, you can reach out to them over email. 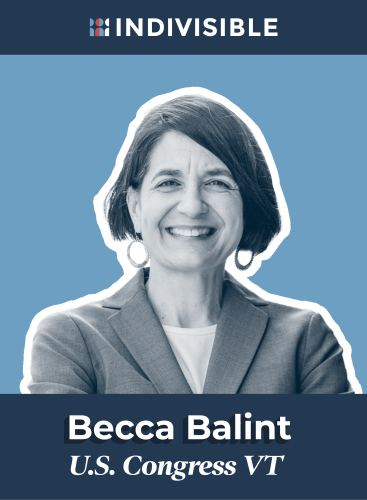