A fourth-generation Texan born and raised in El Paso, Beto O’Rourke’s fiery dedication to helping Texas families and willingness to stand up to MAGA politicians in the pocket of the gun lobby has made him a household champion across the state. He’s part of a new generation of fearless Democrats who refuse to back down in the battle for a brighter future.

Beto’s not afraid to take bold action in pursuit of safer schools and communities. He has publicly confronted cynical politicians unwilling to even discuss common-sense gun reform, stood up for reproductive freedom and the right to medical privacy, and taken the lead on community relief efforts when others fled for luxury resorts. Beto’s plan to fix the unstable power grid will ensure that Texans have access to life-sustaining basic utilities, and put a stop to the price-gouging that’s cost Texas households thousands in electricity bills while lining the pockets of energy company executives.

Beto’s deep connection with the people of Texas and his experience as a small business owner, community leader, and U.S. Representative means that he’s ready on day one to bring new, progressive leadership to the state. For his courage, his plainspoken advocacy, and his dedication to building a safer, fairer Texas, Indivisible is proud to endorse Beto O’Rourke for Governor. 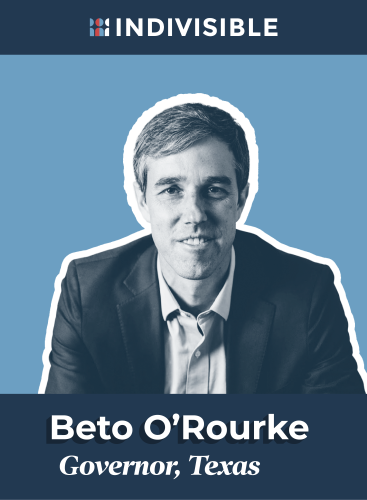