Dianne Dodson Black is a cosmetologist and small business owner, and the first black woman to run for Congress in Mississippi's 1st district. Dianne is running to give voters a seat at the table and fight for Medicaid expansion, protect abortion rights, and to defend our democracy. Her opponent has denied the results of the 2020 election, voted against certifying the election, and failed to condemn the January 6 attack on the Capitol. He also opposed a bill that would prevent price-gouging by oil and gas companies and bring down costs for Mississipians.

Dianne has been an advocate for forgiving student loans to relieve the debt burden on millions of Americans, as well as raising the minimum wage so everyone has the chance to make a decent living. Dianne would bring to Congress both long-time community leadership and people-first representation, and Indivisible is proud to endorse her.

Indivisible NEMS nominated Dianne Dodson Black for a national endorsement. If you would like to join the group or get involved, you can reach out to them over email. 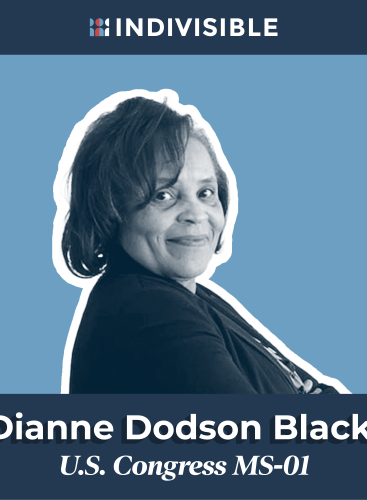