When Jeff Jackson became one of the youngest NC State Senators in 2014, he got to work reforming the criminal justice system, fighting against illegal gerrymandering, and helped repeal HB 2, the discriminatory, anti-trans “bathroom bill”. When it comes to protecting our democracy and defending our rights, Jeff is the leader we need.

Jeff will bring to Congress honest, decent, transparent and practical leadership. In his years of public service, Jeff has made a point to support and work with the local grassroots, especially Indivisible activists. And during his US Senate campaign, Jeff visited each of North Carolina’s 100 counties, holding 100 town halls in 100 days.  He’s ready to tackle head-on the challenges facing this district: elementary schools with lead pipes, failing roads and bridges, and an affordable housing shortage. As a father of three, Jeff’s approach to public service is one that strives to serve our future well, and we’re proud to endorse him for Congress.

Indivisible NC District 9 nominated Jeff Jackson for a national endorsement. If you would like to join the group or get involved, you can find them on Facebook or their website. 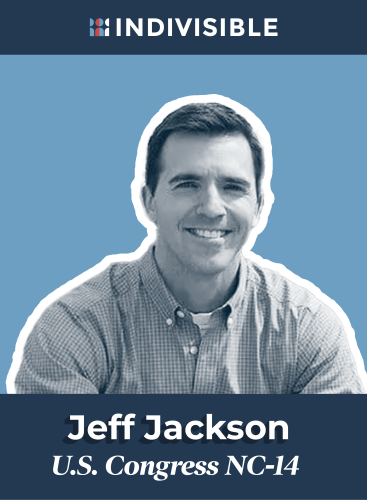