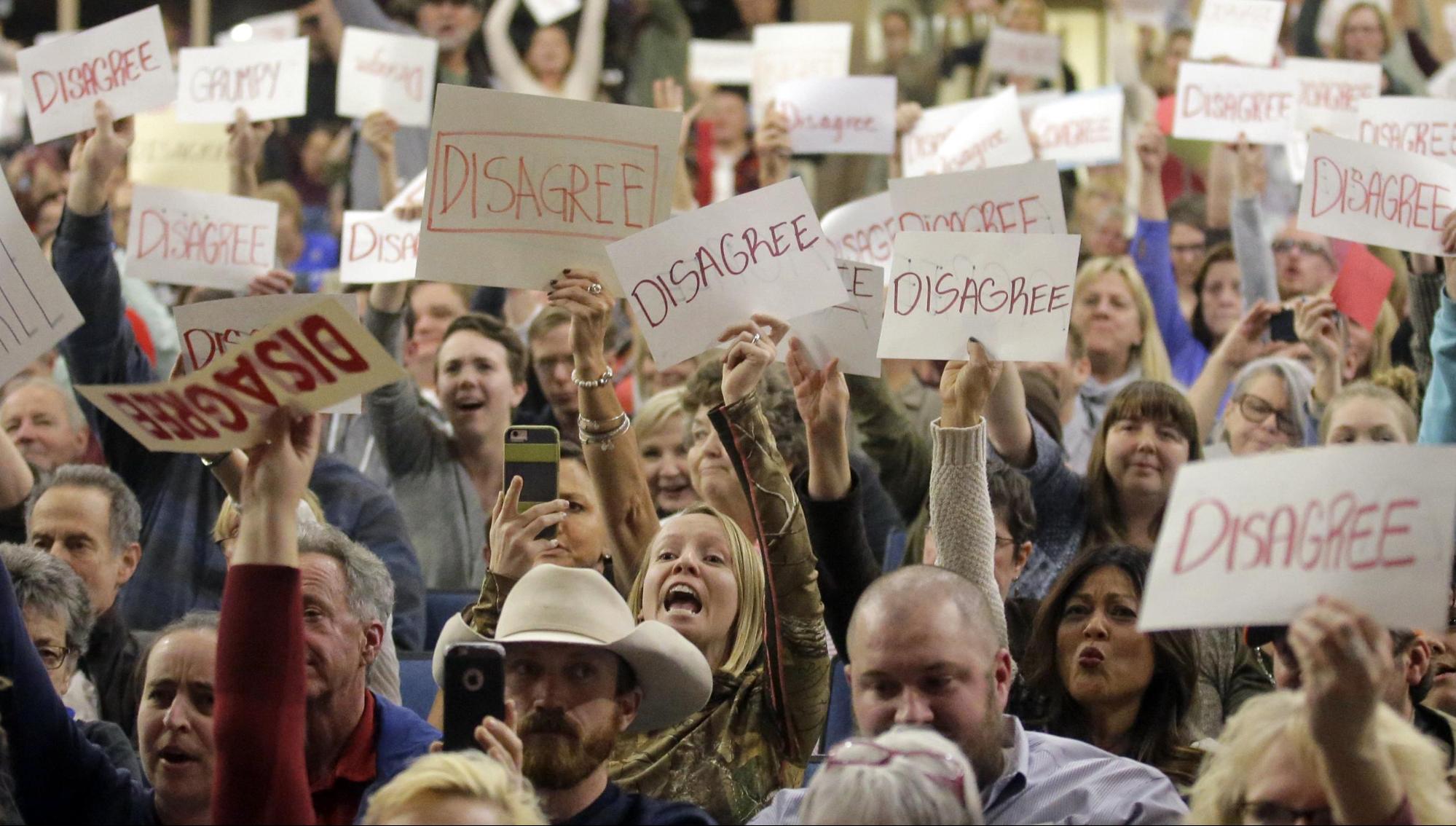 Bird-dogging is the grassroots activists’ not-so-secret weapon. A viral video of a constituent demanding accountability from their representative can change the political landscape. These moments demonstrate the importance of two bird-dogging musts: the authenticity of the grassroots voice, and visibility.

There is, though, another key to success: language. As important as it is to be in the right place at the right time (with a camera), it’s just as important to use the right words in the right way. Below are some general guidelines on bird-dogging language suggestions based on our priority issue areas. While this guide can help you focus your questions and elicit the right answers, remember that your voice is the essential ingredient. Use these tips, but always remember to speak from your own experience and values.

When you get in front of a candidate, you need to make sure your question is effective — so match your approach to the situation. For example, if you’re in a town hall scenario or another forum where you have time to ask a long-form question, start by connecting the issue to your own experience, making it personal. However, if you’re in a rope line or other public space where a candidate is not taking long-form questions, get directly to the crux of the issue.

Why, What, and How

When you’re scripting your questions ahead of your bird-dogging opportunity, you want to structure your them in a way that puts the candidate on the spot. That means not giving them an easy out with a simple yes or no question (because they usually won’t give you a simple yes or no). So instead of asking, “Will you support a Green New Deal?,” ask “What will you do to pass a Green New Deal?” or “What does the Green New Deal look like in your administration?”

Asking why a candidate supports or opposes a policy pushes them to explain their reasoning behind their positions. That explanation can give greater visibility for the benefits of a progressive policy, or expose weaknesses in a candidate’s opposition to a progressive priority.

Asking what a candidate thinks about a policy or what they will do to pass it puts the focus on their priorities. Candidates need to be reminded that they will not be entering the White House with a 60 vote majority in the Senate, so they need to know what they’re willing to do to ensure key policies are enacted.

Asking a candidate how they will pursue progressive change is essential to understanding their theory of change. It reveals whether or not they view issues with a sense of urgency (hint: candidates who won’t endorse ending the filibuster to pass legislation are not acting with a sense of urgency). It also gives them an opportunity to focus on the specifics of policy progress, like how they’ll move legislation through Congress or use executive orders.

While these tips can help you structure a question, remember that they’re guidelines, not rules. If you find yourself with a short window to ask a question, a yes or no may be preferable. In other instances, you might want the focus of your question to be when — like, “When will you host a town hall?”. Always allow yourself flexibility with your questions when preparing to bird-dog.

Democracy reform discussions can be pretty wonky — often, they’re couched in theoretical language and are rarely connected to personal stories. But we’re going to change that together because the health of our democracy and participation in it is a deeply personal issue, as well as a national one.

It’s also important to frame democracy reform as the key to all of our other priorities. Involving those other issues in a question about democracy can be more effective, and advance the visibility of both priorities simultaneously.

Asking about the filibuster:

Trump wins when he controls the narrative on immigration; he loses when Democrats are firm and specific in their immigration vision. Questions on immigration should center impacted communities, lift their voices whenever possible, and be values-driven.

Donald Trump has weaponized racism and built his campaign on xenophobia. He has used existing U.S. immigration law to justify his assault on Latinx communities and inhumane treatment of families at the border. How will you address our immigration system that criminalizes people for crossing the border, so that someone like Donald Trump can never use it as a tool of hate again?

The idea of “Comprehensive Immigration Reform,” or CIR, is a general policy concept that has been the focus of specific legislative debates for forty years. When politicians talk about CIR, they typically mean a plan that would couple a pathway to citizenship for the 11 million undocumented immigrants in this country with increased militarization at the border and funding for agencies like Immigration and Customs Enforcement (ICE) and Customs and Border Protection (CBP).

CIR represents a failure of imagination on immigration. Democrats who are still relying on “CIR” as their immigration plan are telling us they accept the underlying premise that relief for immigrant families must be paid for through expanded immigration enforcement and barriers to family unity. We reject this idea and must demand more than CIR when bird-dogging.

Democracy reform and immigration are priority issues that require a lot of attention and visibility in elections, but there are plenty of other policy areas we can ask candidates about. Climate, abortion, racial justice, health care, and foreign policy will also all be crucial to the 2020 elections. It’s important to always center and uplift impacted communities in your questions and be specific, especially on matters that Democrats generally agree on, like abortion. Here are some examples:

Climate questions should focus on the urgency of the crisis and the communities that are most vulnerable in climate disasters. We should also be pushing for details on how a restructured green economy will be more equitable and fair.

Reproductive freedom is relevant to people across genders and economic lines, but restrictions on abortion overwhelmingly impact low-income people and people of color. When asking questions on reproductive freedom, bird-doggers should avoid using Republican talking points, like “How will you prevent women from resorting to back-alley abortions?” or “How will you ensure abortion is safe, legal, and rare?”. Bird-doggers should also use gender-neutral language, and highlight the ways poor people and people of color are targeted by abortion restrictions.

Why we don’t use “late-term abortion”

“Late-term abortion” is not a medical or legal designation — it is an intentionally deceptive phrase coined by radical anti-choice Republicans. “Late-term” implies that there is some meaningful difference in an abortion procedure depending on when the patient seeks it, which is flatly untrue. To avoid that narrative and use more accurate language, “later abortion” or “abortion throughout pregnancy” should be used when discussing restrictions placed on reproductive health.

On questions of racial justice and the racial wealth gap, we must prioritize the voice and visibility of Black and brown people. That means that we make space for those voices to ask the questions, and use our platforms to demand answers whenever possible.

There is no shortage of discussion on health care in this primary, so use your questions to dig deeper into the candidates’ positions and plans. And always try to tie health care to other major issues, like immigration and money in politics.

Foreign policy gets very little air time in primary debates, and discussions are more frequently framed in the context of security threats rather than aspirations for peace. When asking foreign policy questions, bird-doggers should push candidates to lead with progressive values.