The Indivisible Guide to the New York State Legislature

The 2018 blue wave brought progressive change around the country and its impact was especially powerful in New York. Progressive legislation has stalled for years in New York State (NYS) because of the Independent Democratic Conference (IDC), a group of breakaway Democratic senators who maintained a power-sharing agreement with the Republican Caucus. In 2018, Indivisible groups and progressive advocates in NY worked hard to replace most IDC members with genuinely progressive Democratic senators.

As a result of this political activism, NYS is a new blue trifecta, meaning Democrats control both chambers of the legislature and the governorship. Now it’s time to make New York State into a national progressive leader. Our new blue trifecta gives us the power to pass innovative policy and become a bellwether for progressives nationwide. We have a lot of years of stalled legislation to make up for!

Indivisible groups are ready to lead this charge. Some New York Democrats are with us—they’ve been just as frustrated by the IDC and the Republican-controlled Senate as we have, and they’re excited to get to work. Some more moderate Democrats are nervous. They’ll finally have to take votes on progressive issues that have stalled in the Senate for years. It’s up to us to hold them accountable.

In this guide, we’ll walk you through how the New York State Legislature operates. For more information on the importance of state advocacy, what motivates state legislators, and how to get started, check out the Indivisible States Guide.

New York has a bicameral legislature, which means there are two chambers: the Assembly and the Senate. The Assembly has 150 members: 106 Democrats, 43 Republicans and one Independent who caucuses with the Democrats. The Senate has 63 members: 40 Democrats and 23 Republicans, with one conservative Democratic Senator, Simcha Felder, who has historically caucused with the Republicans.

A bill must be introduced by a Senator or an Assemblymember. Bills can also be introduced by standing committees, which are groups of legislators that regularly meet to consider legislation on certain topics. The exception to this rule is the yearly budget, which is introduced by the Governor. (More information on the budget process is below.)

After a bill is introduced, the chamber’s leadership (the Assembly Speaker or Senate Majority Leader) refers it to an appropriate standing committee. For instance, a single-payer health care bill would probably first go to the Health Committee. They may hold public hearings and make amendments to the bill as a part of this process. Ultimately, committees can vote to take a few different actions on a bill:

All bills with a “fiscal note” (which is a required expenditure of state money), must also pass the Assembly Ways & Means and the Senate Finance committees in addition to the standing committee to which they are referred.

A Note on Committees

In most states, any member of the public can sign up to testify in support of or in opposition to a piece of legislation. This is not the case in New York. Usually you must be invited by the committee to testify. In fact, most bills in New York never receive a public hearing at all—even those that pass out of committee—but some do. You can still share your opinion by sending testimony to the committee chair or to your representative, who will send it to members of the committee. Testimony will be even more impactful if it’s sent from your Indivisible group.

Because of this power dynamic, there isn’t much debate that happens during committee meetings. Public pressure can still change members’ votes, however. Even if the meeting isn’t public, constituents sometimes gather outside the committee room to make their opinions publicly known.

Committees do not have the power to ensure legislation they have passed receives a vote in the full chamber. Once a committee has reported a bill to the floor, leadership must schedule the bill for debate and a vote. If this doesn’t happen, then the legislation essentially dies in limbo. As with committee votes, bills pretty much always pass once they receive a floor vote, because chamber leadership only schedules votes they know they can win.

If this all sounds pretty opaque and clandestine to you, you’re right! More information on Albany’s well-earned reputation for secrecy is below.

Once the bill has passed all relevant committees, it is referred to the floor and the chamber leadership can schedule the bill for floor debate and a vote. Leadership also attaches rules to each bill that govern how the legislature can debate a bill: how long the debate can last, whether amendments can be added, and more. Floor debates are open to the public, which makes this is an excellent place in the process for constituent action.

When legislation passes one chamber, it is sent to the second chamber if it has not already been introduced independently. Many times, bills pass the Assembly and Senate in slightly different forms. In this case, chamber leadership usually meets informally to agree on a compromise version. Once an identical bill has passed both chambers, it heads to the Governor, who can sign or veto the legislation.

A Note on Vetoes

Once a bill has passed both chambers, the Governor has 10 days (not including Sundays) to sign or veto it.

If the Governor doesn’t take any action in that time, the bill automatically becomes law. Vetoed legislation can still become law, if a ⅔ majority of each chamber votes to override the veto (but to be honest, this rarely ever happens).

Once the legislature adjourns for the year, usually at the end of June, the veto rules change. At that point, the Governor has 30 days to sign or veto legislation. If the Governor doesn’t take any action, the bill is automatically vetoed. This is called a pocket veto.

Each year, the Governor introduces a budget for the upcoming fiscal year. The Governor must introduce the budget into the legislature by February 1. The Legislature cannot make substantial changes to the Governor’s budget directly; it does not have the power to add funding to the Governor’s budget, but it can add legislation and reallocate funding under certain circumstances. The Assembly and the Senate create and adopt their own budget proposals, however, by making changes to the Executive Budget. At that point, the Assembly Speaker, the Senate Majority Leader, and the Governor negotiate to finalize the budget, which must be passed by both chambers before the start of the fiscal year on April 1. In addition to the actual budget for the fiscal year, New York State often legislates through the budget, meaning that significant policy proposals are included as part of the annual budget rather than as standalone legislation.

There’s nothing transparent about this process: Governor Cuomo uses an arcane rule to bypass public review of the budget each year and individual legislators are not typically involved in the negotiations, even though the budget often includes significant legislation.

An in-depth explanation of the clandestine nature of budget negotiations is available here from the Gotham Gazette (2017).

Budget hearings run by the Legislative fiscal committees are public and present a great opportunity for public testimony. You can find the hearing schedule here.

January 14: Start of legislative session, when consideration of bills begins

February 1: Final day for submission of the Executive Budget (it is usually submitted mid-January)

End of March: Governor must submit budget three days before it must be finalized; Governor Cuomo typically bypasses this deadline using emergency powers

The full 2019 legislative calendar, with session dates, is available here.

Learn About Your State Elected Officials

Indivisible States has lots of information on how to learn about who represents you in the state legislature and how to keep track of what they’re up to.

It’s also useful to follow other key elected officials—not so that you can lobby them directly, but so you can work with other Indivisibles who are represented by those legislators. Some other key people to watch in Albany are:

Albany has a well-earned reputation for secrecy, power hoarding and obstruction. The kind of measures that ensure public transparency in other states, such as public committee hearings, are uncommon. Major decisions are usually made by the Governor, Assembly Speaker and Senate Majority Leader—the “three men in a room” (but now two men and one woman!) you may have heard of—rather than by the full legislature. The budget is a great example of the outsized power of New York State’s leadership in the legislative process.

The True Blue Coalition, which includes many Indivisible groups, is leading the charge on changing this! They are working on a campaign to rewrite Senate rules and encourage more transparency and public participation in the legislative process.

The Life Cycle of a Bill

How to Track Legislation

You can read legislation and find out where it is in the legislative process on the New York State Assembly and Senate websites.

LegiScan is a free online legislative tracking tool that allows you to track legislation in one state and Congress. If you choose New York as your state, you can track bills that you are interested in and receive alerts when they are scheduled for hearings, debates, and votes.

Twitter is also a great resource for learning about what is happening in Albany minute by minute. Political reporters tweet from inside the statehouse, often providing real time updates of floor debates and committee hearings. This list of New York State political reporters’ Twitter accounts is a great place to start.

Getting Around the Capitol

All of these buildings are part of Empire State Plaza, a complex with a central underground concourse that connects them all. 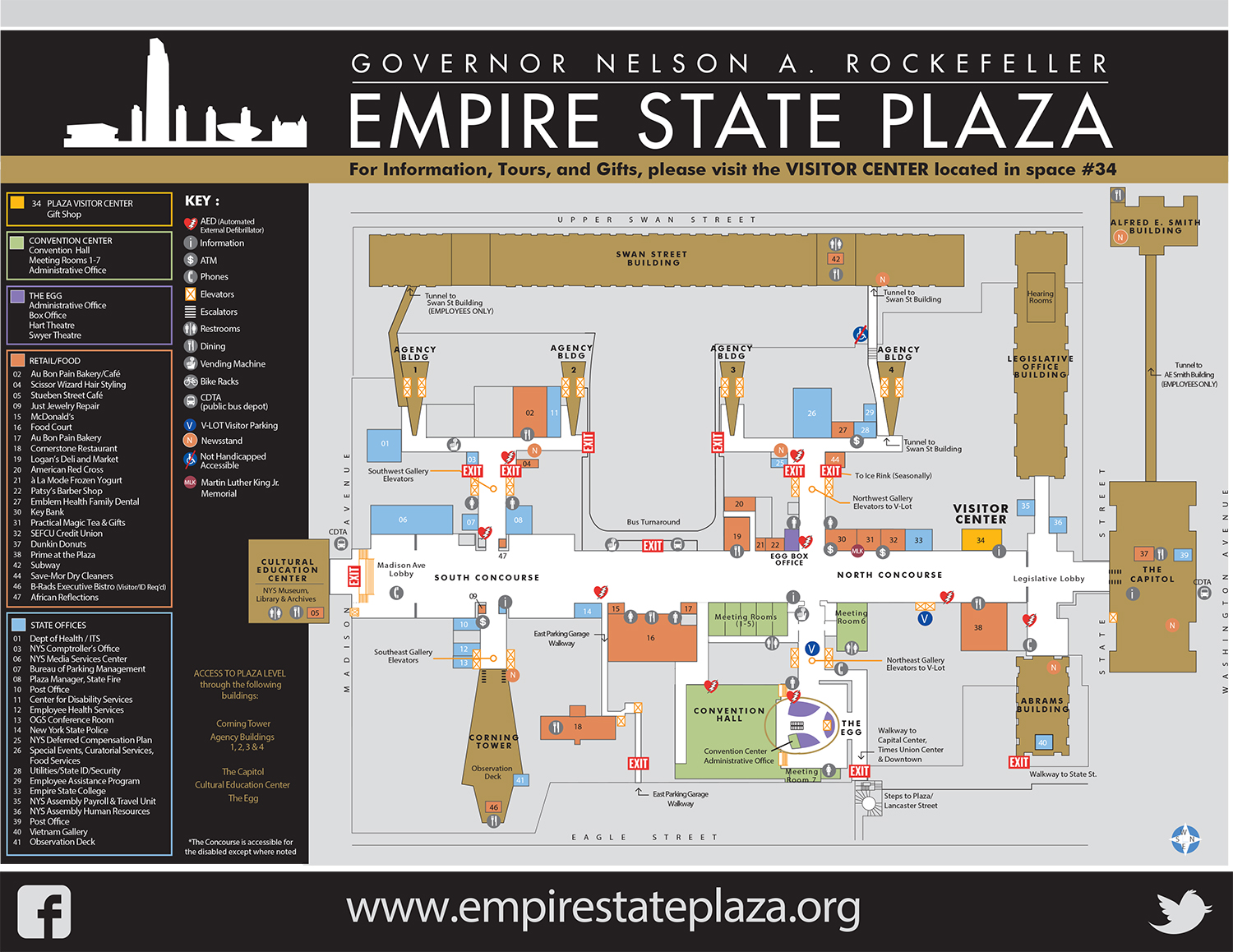 Now that you understand how the New York Legislature, works, be sure to check out our Indivisible States guide. It has more information on campaign development and tactics, developing strong partnerships with local advocates and reporters, and more.